WHOSE WOODS ARE THESE....

These woods are about 700m (1/2 mile) from my house.  Yesterday was very mild so I went for a pleasant walk. 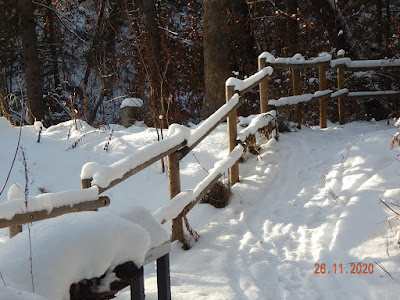 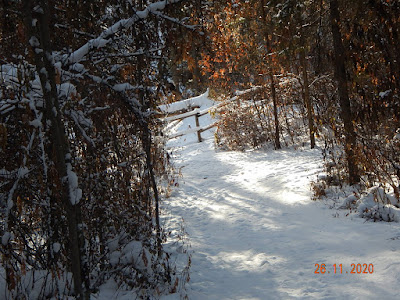 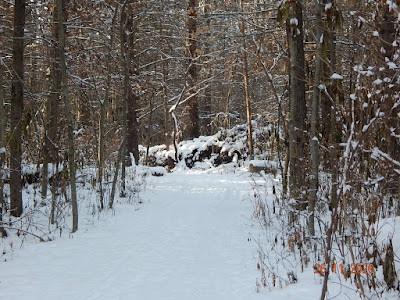 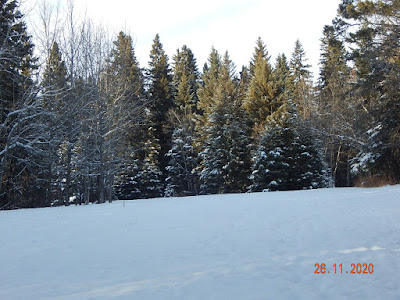 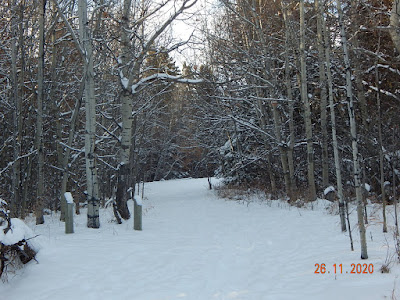 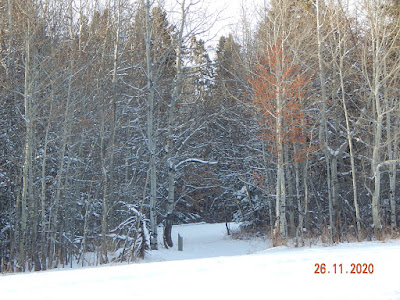 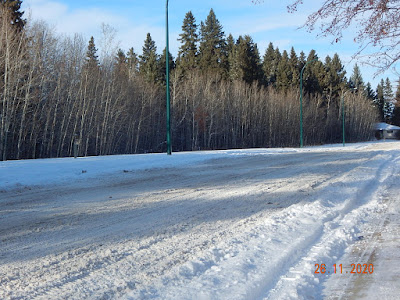 I've always liked Robert Frost's poetry and especially this poem. I can sense the stillness in the woods as he stopped.

I got thinking today about comparisons of my Grandpa, my Dad and myself. I was thinking that since I'm somehow in my eighties I could show Grandpa , Dad and me all in our eighties. I couldn't or don't know how to  get similar photos of each. 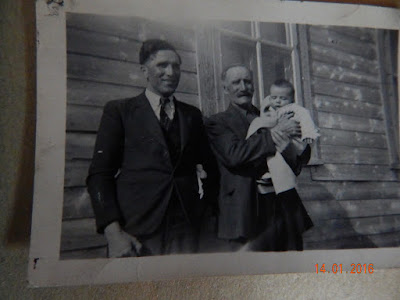 Here's Grandpa in his early eighties. 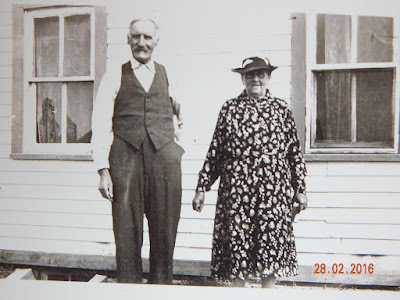 Here's Dad when we were celebrating his eightieth birthday. Dad's on the left by the way! Now two of his sons are in their eighties. 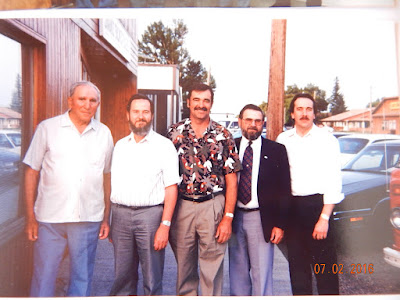 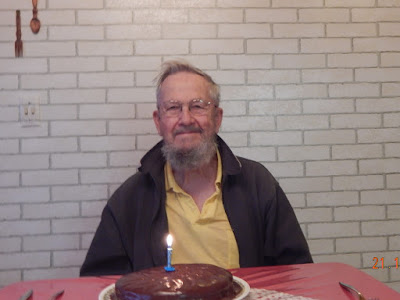 Bushwhacking is when you go off trails and make your way through the bush by going around or over anything in the way.

Today for birding we bushwhacked an area. It's hard going but you see some very different things.

We saw thousands of ducks on the river. Around every bend were hundreds of ducks. There were also many Canada geese and a few other species of duck mixed in with the mallards. The river is not frozen over but full of ice which is flowing along with the current.

The weather was pleasant: sunny and about minus 3 C. 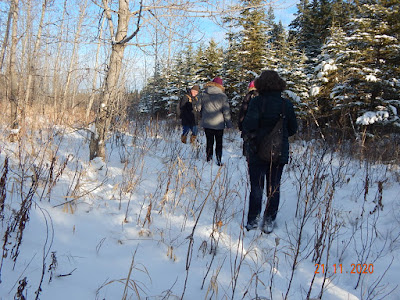 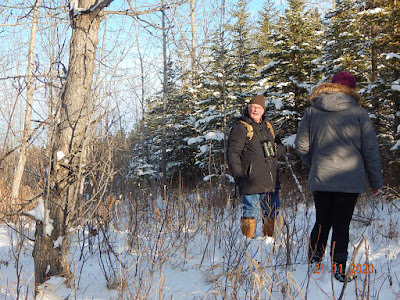 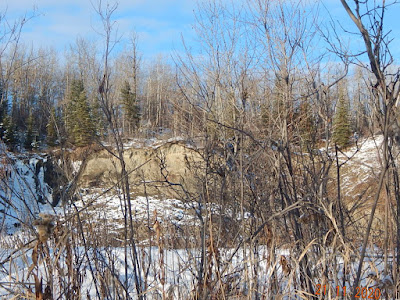 At this time of year people will be looking to have a treat and go for a hayride. Fine horses will pull the sled or wagon. Horses will have fancy harness with colored rings and bells. Off people go and there's no hay on the ride! I once saw a rig with hay bales and another rig with wooden benches.

It reminds me of the many hayrides I had as a child. Very few people will have experienced this or remember it. I think Maybe JB from Cottage Country Reflections might  remember these days.

I was born in 1939. My Dad bought his little farm in 1935 in the middle of the depression. He had very little money to buy animals or equipment. However, at that time many farmers had gone broke and were leaving. They would have an auction sale and move. Now people going to the auction sales didn't have much money so many things didn't sell and were left. This is where my Dad got his stuff...on auction sales. This stuff was very old and in poor repair. He bought horses that were poor and old.

Farming at that time was labor intensive. Before the depression farmers always had hired men. Dad had to work by himself.

So getting and storing food for his animals went on for a long time. Grass was cut with a horse drawn mower that had a 5 foot blade. It took a long time to cut much grass. Then the hay was raked in rows. It could be put in small stacks at that time or hauled home. 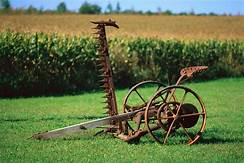 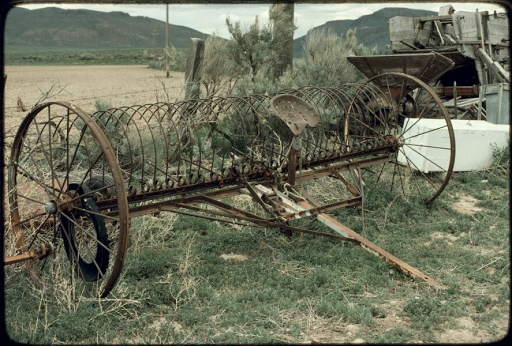 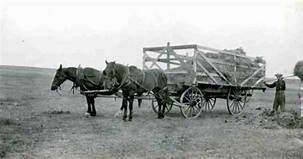 So here come the hay rides. When I was big enough I arranged the hay on the rack while he loaded the hay. Then ride home to the yard to unload the hay. It was fun to lie in the hay. My brother and I probably threw hay at each other. On top of the hay was a good place to practice our wrestling technique. Somehow we never fell off the load of hay.

In the cold of winter the hay ride was different. It was on a sleigh and sometimes very cold. We would run through the hay and bury ourselves in the hay. If it was cold we didn't notice it.

It was a lot of hard work for Dad and some fun for us kids but it was a realistic hay ride.

I have always appreciated office staff in schools. They really know what's going on and they bail teachers out from all kinds of difficulties. They also have a lot of pupil contact.

Teachers seem to have the fear that if they for one second they let somebody away with something , the whole world will fall in and all students will want to be allowed to get away with the same thing.

One example is being late for school. Most schools have a very stringent late policy. There always are some students who are habitually late. Well yes, if a kid is late he needs a late slip to get into his class and he will be punished by having to stay after school. That's supposed to make him not come late and most of the time it works.

So one of the fine people in the office has to look after lates. One person we had looked after the front desk to handle school visitors, kids and teachers. And yes she handled lates. She was good at it.

I happened to be in the office one day when she was having a kid fill out a late slip. The kid was a big guy and a little rough around the edges.  While the kid was filling out the late slip our lady was giving him a running talk as to why he shouldn't be late. It went something like this. " Honey, you can't be late all the time. Honey, you have to get to school on time, Honey, you will have to get up earlier." Well the poor kid had probably never been called honey before. He was uncomfortable and rocked back and forth with each "HONEY". So it was funny to see this kid's reaction to  the secretary's pep talk about being late.

I've often wondered if the kid was ever late again of if he wanted the "HONEY"  treatment again. This kid certainly got much more for being late than just a late slip.

By the way, I got the hone treatment a time or two and I wasn't even late. That's just the way this lady was. She was excellent in handling the front desk...the first point of contact in the school.

From the teacher's hat again.
I started teaching in 1958. Things were much different than today. Kids were about the last thing we thought of. There was some very despicable behaviour by some teachers. Kids were yelled at, shoved, slapped and many other inappropriate behaviours.
Gradually things began to change. After all school was for kids. School should have been a good place for kids.
Slowly students were acknowledged for small personal things. One of the best things as far as I was concerned was to acknowledge kids on their birthdays. In the "modern " age of the intercom it was easy to wish a kid a happy birthday. If I saw the kid  in the school I would wish them a happy birthday. I got the feeling that kids really felt good when their birthdays were acknowledged. However, mistakes are made. Sometimes a birthday was missed. Many times I had some little character approach me in tears as their birthday had been forgotten. I would immediately turn on my heel and head to the office to tell them of the error. It was a treat to see a kid's face when the announcement of their birthday came on the intercom.
So I learned that these small acknowledgements are very meaningful to people.
A few days ago there was a big sign and 50 hearts on stakes in my neighbor's yard. It was their 50th anniversary. I phoned them later on in the day to wish them well. I couldn't believe how happy they both were that I had phoned. 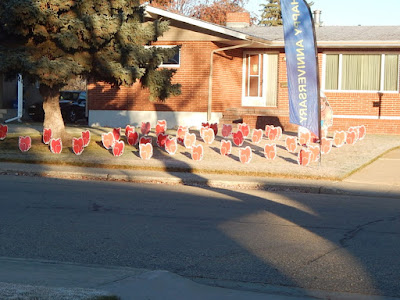 Another neighbor stopped the other day and in the course of the conversation said his birthday was the next day. I immediately wished him happy birthday. He appreciated the unexpected greeting.
So I think that if we all gave some acknowledgement to the people around us the world would be  better place. A person receiving a greeting is happy to be noticed. The people making the greeting feel good about themselves.
Donald Trump seemed to go out of his way to insult anybody he saw. Wouldn't it have been much better for everybody concerned if a decent approach had been taken towards people . As it is we have ended up with a very sad and negative situation.
Posted by Red at 7:47 PM 37 comments:

SOME COMMENTS ON LOSING

In the American election one has to lose and one has to win. Losing is never very easy

I would rarely put my name up for an election. I could not handle the experience of losing. Now all my life I have participated in organizations but very few times did I go through an election process. I was appointed to the local library board. I served on many teacher committees and executive. I loved salary negotiations but I guess many didn't like negotiating because is was sometimes difficult to get a whole committee. Again I attended the provincial teacher's association conference. It was an experience that gave me many skills in leadership and debate. I once argued for a motion that didn't even make it to the floor for a vote!. I enjoyed these activities but they were never things that I had to run in an election.

Now some people look at a position and for various reasons, they want the position. People have issues that they would like to push forward. So what I'm talking about here is politics. Some people have a "fire in the belly" and they want to be elected.

People win election but then they have to be prepared to step down or lose an election. People have to  be prepared to compromise on many issues. When an issue is seen in black and white things are going to be difficult. One guy loses. One guy wins. Through compromise and negotiation we can sometimes get the best of two worlds or at least find a situation that is acceptable to both sides.

That sad issue is being very poorly played out the U.S. Trump cannot understand why he losing. ( I can't understand how anybody could vote for him.) I can understand Trump not liking to lose. However , when the people say we're finished with you. You have to go. Somehow the message should get through that you've lost.

With some very nasty protests going on it looks like quite a few people do not quite get the reality of losing.