WHEN YOUR SON USES THE TERM "THIRTY YEARS AGO"

A few days ago my son used the term 30 years ago as it applied to him. It shocked me for a second or two. I
t was hard to believe what he had experienced was thirty years ago.

He said , "Thirty years ago I took my basic army training!" It sounded surprising to him.

Now it brought back all kinds of memories from that time.

He came home the day high school was finished and swaggered into the house with his buddies and gleefully said. "I joined the army." This bowled me over. We had worked with him to enroll in a quota program at University. Now he's going to throw all that away and join the army!

Well, after some devilish laughter he explained that he had enrolled in a summer program for the reserve armed  forces. What it meant to him was a well paying summer job with some excellent experience. Of course, he was in with his two best buds.

The 10 week basic training program was a good experience for him and he decided to stay enrolled in the reserve forces. He also gained some life long friends. This would give him some money throughout the year as they trained weekly.

That year he was accepted for officer training and spent the summer in Camp Gagetown. It was a good paying summer job with good experience and advancement. 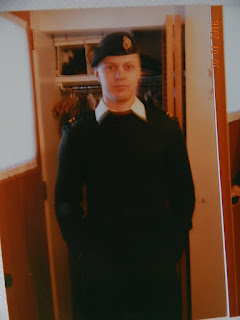 The third year he spent the summer in communications training again. The fourth year he was Officer in charge of the original basic training program he took. So he learned much about leadership and communication.

I enjoyed watching some of the ceremonies they participated in.

Now when he said 30 years ago I found it hard to believe but it brought back many good memories.
Posted by Red at 8:59 PM 42 comments: Links to this post