Tonight I was out for my usual bike ride and stopped to chat with Mike. We were 100m from the bike trail into Bower Woods.

As we were talking I noticed a mid sized dog running down the middle of the road away from the bike trail. I thought "wow" a loose dog. About a minute later I noticed a coyote standing on the bike trail about 15m from the side walk. The coyote stood for about a minute and was probably watching us and wondering,"Where did that dog go?" The coyote quietly turned around and went back into Bower Woods.

You often hear of coyotes chasing dogs and preying on dogs, but this is the first time I have seen an incident. Bower Woods is right beside a residential area. Bower Woods is about 80 hectares of variable habitat with a creek running though. I went on the bike trail a few minutes after the coyote left and there were many people on the trail: walkers, runners, families and people walking dogs.

Coyotes are common in this area and are common in Red Deer as we have natural areas left along the river and streams. These natural areas are connected so it's a good habitat for wildlife. Coyotes eat a wide variety of material in the wild. The other side of Bower Woods is a large shopping mall. I would think the coyotes would find much very edible garbage in the mall parking lot each night.

Let me know if you have seen any incidents where coyotes are chasing dogs.
Posted by Red at 8:19 PM No comments:

I'm getting to be quite a whiner lately! Really I'm fairly amiable and easy to get along with. But when it comes to shopping I am challenged and I know it.

So what brings this sudden complaint? Well, my daughter is getting married next July and since Home Farm Girl and I are walking her down the aisle, I have to look pretty. Well , you say that's a year from now. I agree, but Home Farm Girl gets really nervous and has to get me ready because maybe all mens' clothes will be sold!!!

As you can tell Home Farm Girl is the shopper. She can think of 99 questions about the fabric in a pair of pants let alone where they were made and what style they are. Okay, good for her, but my patience is gone before I walk in the store. So Home Farm Girl has quite a challenge to get me to look at clothes and try them on.

Now I'm a comfortable "rumple." I like tee shirts, jeans, jean jackets and black and red plaid wool shirts. This stuff's comfy. With my black and red shirt I am comfortable to minus 10 C. Add a hoody and I'm good to minus 15. So I have things figured out for comfort. It maybe doesn't look too cool but it's comfortable.

So the other day we got a nice pair of gray pants, blue shirt and yellow tie with blue and gray in it. So I will look pretty for my daughter's wedding which is outside in an arboretum in Chicago.
Posted by Red at 6:44 PM 1 comment:

Yesterday a tremendous amount of smoke came in on a weather system from the forest fires which have been burning in British Columbia all summer. These fires are at least 500 miles away from us and across the Rockie mountains.

The smoke was quite noticeable at 7:00AM. By afternoon smoke was obvious within 100 meters. It looked like every home owner had a bon fire in the back yard. The smoke was blue and very easily to smell. Visibility was down to about 1km and the sky was completely obliterated by the smoke. Needless to say our day was extremely dull. Night came early. When we saw the sun it was an orange red. Too bad I didn't take any pictures yesterday.

Later in the evening we had thunderstorms which continued until about 3:00AM.

Today there was much less smoke and the day was much brighter. However we did not see any blue sky. This condition is supposed to last until the 21 st . One wonders at the huge amounts of material burned to produce such a tremendous amount of smoke.

A garage sale character who showed up only once has been remembered at all my garage sales since. She was known as the "Crazy Lady." Anytime since then when things slow down we say, "We need the Crazy Lady to show up. 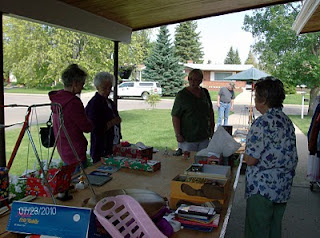 About 7 garage sales ago we were at the end of the day and ready to start packing up. The day had been slow and was disappointing because not much was moved. As happens quite often just before you close, there is a flurry of activity. A customer showed up and she began going around picking up numerous items. She seemed to find many things she could use or liked for various reasons. She would pile things up and say that was all . We would start to add things up. Before we could total up the cost of items she would find some more things. Needless to say, we did well just at the end of the day with one customer. To top it all off we found that many of the things she paid for were left in various places. Because of this behaviour she became known as the "Crazy Lady."


So just like the famous "Fat Lady" we have our crazy lady who we wait for to come and make our day a good one.
Posted by Red at 7:16 PM No comments:

Of the many garage sale customers one gets, there are a few who stand out because of some unique behaviour and characteristics. Most people arrive, take a look , make comments, ask questions and either buy something or leave. A few comments may be made and that's all.

I have been involved in about 10 sales. One character has been to most sales and has left an impression on me because he has some rather interesting behavior. He has a rather thick central European accent with a bit of a speech impediment. He comes across as a buffoon by making some goofy comments. However, when you reply to his comments he has a very witty come back. So he skillfully sets you up. His chatter is almost continuous. He does not drive but has a driver. His line the other day was that he would like me to drive him as the other "guy" was starting to be cranky and how much would I charge him. Home Farm Girl suggested that she would pay him to take me. He ran with that comment and teased her as to what kind of woman she was to want to get rid of me.
At my daughter's sale he bought a university text from an art course she took. It turned out that he was very knowledgeable about art. There definitely was another side to him that showed he was no buffoon. He could discuss art with a great deal of authority.

He cruises around your sale with his constant chatter. Then he quickly choses several items, makes his purchase and leaves. He probably attends most garage sales and follows the same pattern of behaviour. I'm sure many of the people in my town will know who I'm talking about. Probably none of us know his name.
Posted by Red at 6:55 PM No comments:

Every once in a while we find ourselves in a challenging predicament. Today was my day to be caught in a bind.

My back door lock decided that this was the last day it wanted to serve me. My back door is on the side of my house so most of the time if I sit or work in my back yard I lock the door for security. This afternoon when I went to go back into the house the key just turned round and round. There was no way the lock was going to open.

So two stubborn independent 70 year olds, crawled through the house window to unlock the door from inside. None of this calling the lock smith for us. Tomorrow we have to find a new lock set. But right now we're just happy to be in the house.

I asked Home Farm Girl if she'd go up the ladder and through the window so I could take pictures. She was not amused.
Posted by Red at 7:50 PM 4 comments:

I just finished reading "1421 the Year the Chinese Discovered the World" written by Gavin Menzies. A few posts ago I reported on the Man Who Loved China and I called the post "How Accurate is Our History." This is more on the same theme about the advancement the Chinese had made and then closed themselves off from the world.

Both books explore the same theme and really make you question the history we were taught.

Menzies proposes that in the year 1421 the Chinese with numerous large ships   travelled to all parts of the earth. He has much evidence that he puts together to support this view of history. The Chinese had regularly traded with India for 600 years. The Chinese had ventured down the east African coast for  200 years. The Chinese understood to a high degree the basics if navigation. This meant they were able to go to unknown areas of the earth and be confident that they could find their way home. They could also chart with some accuracy the lands they visited.


The first European explorers had a map of where they were going. Menzies believes Columbus and others had charts made by the Chinese. Ship wrecks have been found dating from the 1421 in various areas. Artifacts such as the blue china the Chinese produced has been found in the areas the Chinese discovered. The Chinese collected plants from vast areas and took them home as well as establish them in other locations. Menzies puts these ideas together with many others and gives a very convincing argument that the Chinese were the first to discover the world.

By the time they returned to China the old emperor had died and the new emperor had all evidence of this exploration destroyed and China went into a long period of isolation from the rest of the world.

Next, I will read 1434 and after that a book that argues with some of Menzies evidence.
Posted by Red at 9:23 PM No comments:

First Meal of New Potatoes in 2009 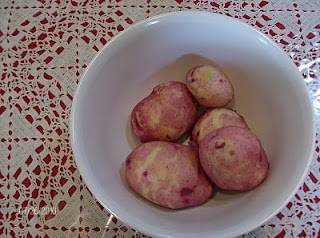 So let's face it, I really like potatoes...especially new potatoes. Potatoes boiled, fried, deep fried, baked, scalloped, hash brown ...I love them all. I eat all the other starches like rice and pasta but I prefer the potato.


My vegetable garden is very small so I only have room for a few hills of potatoes. My garden is also messy as you can see a gooseberry bush, volunteer sunflowers, lettuce, a clump of Home Farm Girl's flowers and the compost box. A bit messy but the potatoes are great! 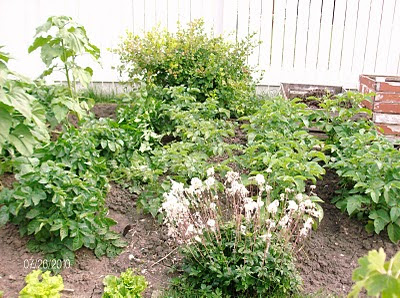 I was driven to distraction when Linda announced that she was having new potatoes! If she was closer I would have had to raid her potato patch.
So I hope all people enjoy their new potatoes as much as I do.
Posted by Red at 7:29 PM No comments: