Baby Jack Rabbit with an Attitude

I received an email this morning which included a couple of pictures of a new born jack rabbit. 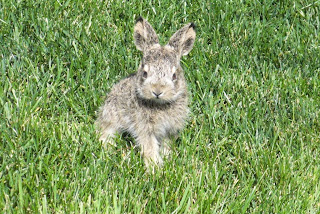 My neighbors Mavis and Duane, happened to find this little critter toddling about on their lawn beside the shrubbery. Their first reaction was to get a picture and their second plan was to shoo the little guy back into the shrubbery for his own protection. When they attempted to guide the baby back to the protection of the shrubbery it hissed at them. More than that, it put a paw out as if to shoo them away. So they gave up trying to help and left him to his own design. They did the right thing to leave him alone. Many people pick these little fellows up thinking that they have been abandoned . Not so. 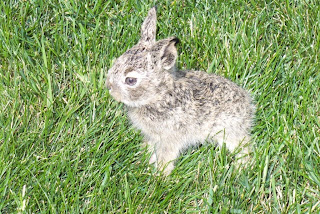 The doe leaves the new born rabbits about an hour after their birth. The babies leave their birth place almost immediately and go in different directions. Even though they are tiny and young they are very mobile and can move easily. The doe comes back from time to time and finds them and nurses them. They do live a precarious life and a high percentage of them are preyed on by predators. The jack rabbit has come to know that there are fewer predators in an urban setting and the food is plentiful. Therefore we have an ever increasing population of jack rabbits in the city.
So thanks Mavis and Duane for being alert and getting a picture and telling a story. This little creature displayed a very independent attitude for his age. It's rather amazing that this birth happened on Sept. 5 which is rather late in the season.
Posted by Red at 8:43 PM 3 comments: Links to this post