This weekend I attended a celebration for friends Betty and Howard's 65th anniversary. This is the first 65th I've ever attended and it was a very moving affair.

Betty and Howard's five children put on a dinner and program to honor their parents. One son spoke of his parents and how they were a Mom and Dad and very family oriented. He covered happy occasions, sadness and how generally the family functioned extremely well. Their life was not just a smooth ride

as they also faced hardships and devastating loss. He described how his mother and father were extremely hard workers and that they also worked very hard for family growth as well. An excellent picture album was put together to show each child's life in the family as they grew up. All grandchildren were briefly featured as well. 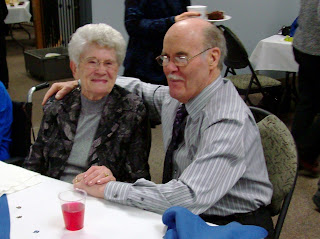 Some of the older friends and neighbors made comments which were humorous and also added to the description of this couple's life.
As I reflected on this occasion I couldn't help but think about how vibrant and energetic this couple was and is. They each had tremendous energy as individuals and also put tremendous positive energy into their relationship. They also had time to participate in the community and were ever ready to help others. They are also both physically vigorous and enjoy life. The pictures gave a vivid description of the length of time that goes into a 65 year relationship. The styles through the decades made it simple to see how much time was involved.
Betty and Howard certainly influenced their children in a positive way and have also
been an inspiration to many other people.
Posted by Red at 7:45 PM 4 comments: Links to this post