Each year we find a upick farm that has raspberries and we pick enough raspberries for the year. Today was the day to pick raspberries. This year our only choice was the Jungle Farm. 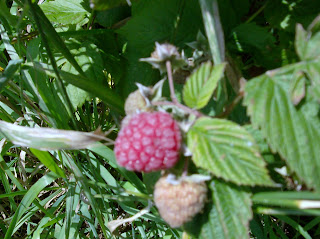 We arrived about 10:00 AM and picked until close to 2:00 PM. We wanted about 10 pounds but ended up with 15 pounds which was quite allright. This patch was extremely large as raspberry patches go and there were  lots of good berries. The patch had received hail about a week ago so many of the berries were bruised but there were still lots of good berries to choose from. This patch has not been well maintained so there was tall grass and weeds in with the raspberry canes. 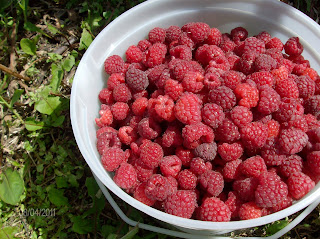 We freeze most of the raspberries and pull them out all year when we want them. Now most of the time we just put a little sugar on them and eat them. At one time the cook did other things with the berries but this cook is getting tired.

My wife loves picking raspberries and any other fruit. She  picked  blueberries with the Inuit where the plants are about 6 in. high. It's the one thing she liked to do with my Dad as my Dad was just nuts about berry picking. He would get his neighbors together and lead them on whole day  of picking Saskatoons. He would move from patch to patch as he was always looking for something better. At the end of the day he had ten gallons of Saskatoons. My Dad fished the same way. He was always looking for a place with more fish. 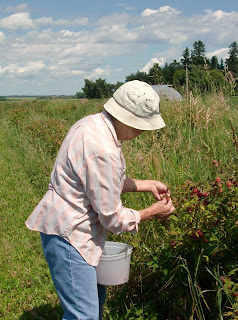 I'm not a berry picker. I'm not even that fond of raspberries but I do go out and pick what we need for each year.  So today I did my duty and spent my three hours in the raspberry patch and will enjoy raspberries this year.
﻿ ﻿
Posted by Red at 8:23 PM 10 comments: