Where have All the Robins Come From? 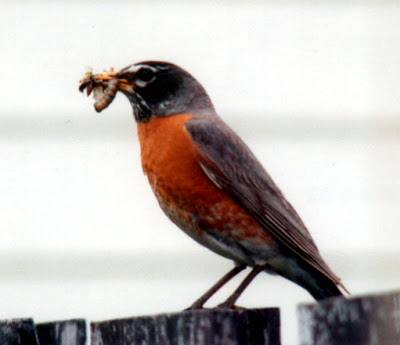 Somebody has just asked Hiawatha House about the abundance of robins wheeling around their yard . I can tell you about your robins and many other things about robins that you haven't been thinking about.

Every year at this time in Red Deer , Alberta, Canada people ask me about all the crazy robins zooming around their yards . What is going on with these crazy birds? They don't act crazy at other times of the year.

To answer these questions you have to back up a bit . I like to back pack above he tree line in the Rocky Mountains. What's the most common bird you see? You guessed it . The robin. For three years I lived on the Mackenzie Delta, which is above the arctic circle. Robins nested there. Now with global warming, robins nest at Sachs Harbor on Banks Island which is 450km further north than the Mackenzie Delta. We are used to thinking of the robin as a garden variety urban bird, which it is, but it is also very widely distributed. We usually think of it nesting in trees ,but they very readily nest on the ground. I have found robins' nests on the ground in Red Deer where there are many trees.

So two things happen at this time of year. First, robins are migrating south. Second, the population is greatly expanded by all the young produced during the summer. These birds usually nest twice in the summer so there is a tremendous population of birds of the year. They are feeding on ripe fruit which has a high sugar content so they are full of energy. Robins are also quiet feisty and aggressive so they chase each other around . This is when they crash into your windows and is commonly why people ask about the dizzy robins.

The birds from the north and the mountains gather here because of an abundant food supply. They slowly work there way south . Some go far south for the winter and some not so far south if they can find a good food supply . Some robins stay at Red Deer all winter. Most years we have robins included in our winter bird count. I have seen robins in early Feb. when it's minus 30C .They feed on Saskatoons and rose hips. They seem to be big birds as their feathers are fluffed up to keep them warm.

At this time of year there are many other smaller birds in the trees and bushes and they are overlooked because of the antics of the robins. They are warblers and sparrows and will soon leave the area . More about them later. Let's just keep this one to robins.