ALL YOU DIDN'T NEED TO KNOW ABOUT RED SQUIRRELS

I have had a red squirrel in my neighbor's big spruce tree for 20 years or more. The cones in this old tree are mature so there's lots of good food. Then there's a silly guy who has a bird feeder right beside the big spruce so it's free food. A squirrel has been busy  storing food since mid August. Today it's still gathering cones.

Then one morning I noticed a squirrel in my yard giving the squirrel in the street a dirty look. Squirrels are territorial and very protective of their area. Some poor little squirrel had obviously been forced out of it's home territory and was looking for another home. Usually all the fighting is done by the beginning of July so I was surprised to see this lost squirrel.

Now some of the squirrels in my tree were female and had litters. What happens is that the mother squirrel moves after her litter becomes independent. She leaves her territory to a daughter and finds another area for her next year and litter. It's thought that this occurs to let the daughter stay in the  familiar home territory as she would have a higher possibility of surviving and having her own litter.

So the little guy I saw was probably the runt of some litter and was having trouble to find it's own territory. Many of these animals perish and do not survive their first year. They have accidents like getting run over on the street. They get diseases. There's also predation. In the wild pine martins catch squirrels almost exclusively.

Now I haven't seen the squirrel that was looking for a home for a few days. It's probably moved to try to find another territory.

There's the 2017 version of the red squirrel. It's enjoying the food from the silly guy's bird feeder. 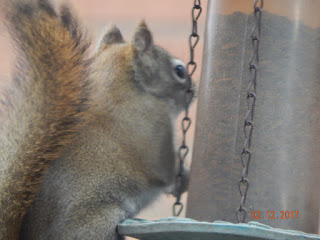 I am being very carefully watched. 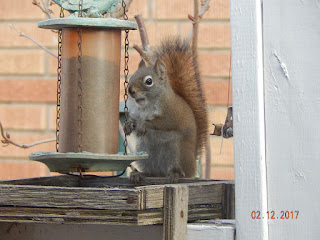 These two photos were taken through my kitchen window.
Posted by Red at 7:26 PM 36 comments: Links to this post