New Trick for a Jack Rabbit

I seem to be writing on jack rabbits fairly often. It's not because I particularly like jack rabbits or that I am an expert on them. It's just that the things are becoming much more common in my area and you see them several times a day. Sooner or later they do some trick and give me something to blog about.
I was delivering papers this morning and visiting with my neighbor, Duane. As we were talking a jack rabbit bounced across the close and into Duane's yard. Then Duane told me his jack rabbit story. 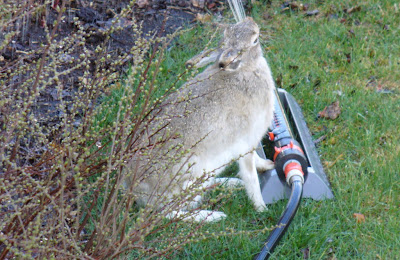 A few days before Duane had set up a sprinkler to water a very small area. He came back around the corner of the house to move the sprinkler and found a jack rabbit right beside the sprinkler. Duane stopped to observe the rabbit and noticed the the rabbit was drinking from the sprinkler. The rabbit watched the sprinkler oscillate and caught drops of water as they fell. Quick thinking Duane, went to the house for his camera. He also called his wife, Mavis,  to see the action. Mavis's comment was "unbelievable!"
Not much is known about rabbits consumption of water. It's thought that they get most of their water from dew on the grass. Much of jack rabbit habitat is on arid prairie and they can be very far from bodies of water. I have seen them on new thin ice stamping their feet as if trying to break the ice to get at the water. They are  are also making a rather loud growling kind of noise as they are beating on the ice. Experts think that they see their reflection in the ice and think it's another rabbit and they are  trying to be aggressive and chase the other rabbit away.
No matter what, this jackrabbit trick is a first for me and also for Duane and Mavis.
Posted by Red at 7:44 PM 2 comments: