The Rabbits are Turning White

A few posts ago I wrote something on "Frost on the Pumpkin". Now, this was late September, and the frost was, shall we say, light. That is to say, there were one or two degrees of frost for a few hours in the morning.

Now we are at another level of frost. We've had lows close to -20C and days where the high was below freezing. With temperatures and daylight changing, there are obvious and not so obvious changes to plants, animals and birds. 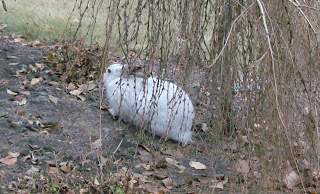 One change which has always brought me some enjoyment is the rabbit changing to white. As a child there were often hundreds of jack rabbits (whitehttp://talkaboutwildlife.com/)where I lived, and their change in color was a highlight for a small child. It marked a very definite change in the seasons. It indicated that any time now, it could become very cold for prolonged periods of time and snow usually began to stay.

This week when I was delivering papers, I found a rabbit under a shrub just in front of a subscriber's door. I was less than a meter away from the rabbit and it did not flush. So I thought I'd have a little chat with the old boy. Still, he (or she) did not move. I put the paper in the mail box and left. This particular rabbit was just about all white. We don't have any snow cover yet, but he was still hard to see. In a few more days this particular animal will be completely white.

Once again, one of my favorite fall changes has given me its pleasure.
Posted by Red at 1:12 PM

Email ThisBlogThis!Share to TwitterShare to FacebookShare to Pinterest
Labels: animals