A few nights ago my niece posted about attending her daughter's parent teacher interview. Her daughter is in grade nine so it's the first year of high school.

So first , the building. I know some fussy pants will say the building has nothing to do with education but the building is the first thing I think about.

The one room school I attended was also used as a church. So I became familiar with the building soon after I was born. I attended Sunday school there so had been in the building every week before I started school. The building was built in 1908. It was a wood structure built with green lumber and uninsulated. When the wind blew the building creaked. This is an indication that the building moved in the wind. We had many windy days with  the wind shrieking and building creaking. These sounds will remain with me forever. In the winter the building was very hard to heat. It had a large coal and wood stove in one corner of the room. The fire went out over night. The next morning the room temperature was below freezing.  Who wouldn't forget this old building. 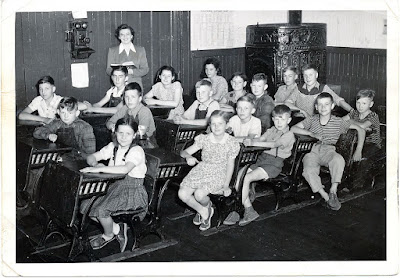 There's the big stove in the corner of the room. 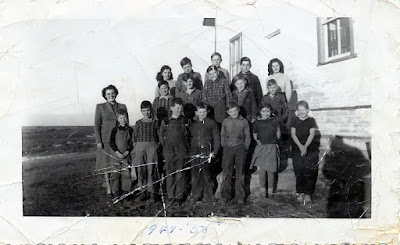 This is the only photo of the exterior of the building that I have. 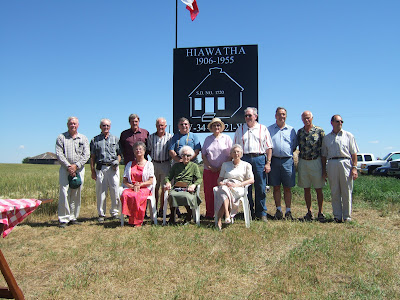 Now before I started grade one I was familiar with the building and most of the kids. I attended Sunday school with the other kids.

In gr. one I sat in a double desk which I shared with the only other gr. one student in the school. There were 17 students in the school altogether. The teacher had to have work organized for 9 grades.  Not much time was spent with each grade. So for a little gr oner there was lots of time with nothing to do. Plasticine had been invented by that time. That kept me out of lots of trouble. Now being a curious little fellow I would get out of my desk and go to another student and quietly watch them work. I also listened to every other lesson in the school . Yes everything from gr one to nine.

This educational structure kept me busy but I also learned far more than gr one material.

I had one teacher who taught us until Christmas. Her boyfriend had just come back from the war so they got married. For the rest of the year we had a 19 year old kid teach us.

I'm sure I new how to read before I started school. The Dick and Jane series came in for my gr. one year. American and Canadian systems used these materials so people from other countries may wonder what I'm talking about.

When I look back at this system I wonder how any student ever learned to read. Many of them didn't learn how to read.
Posted by Red at 7:34 PM