Dad worked around the Vernon, British Columbia area for about 5 years. In 1935 he was 22 years old.

For some reason he was not happy being a Lutheran. He was searching for something else and I don't think he knew what he was looking for. Somehow or other he found the Plymouth Brethern or they found him. He joined them and worshipped with them the remainder of his life.

In 1935 he came back to his home in Esk, Saskatchewan. He bought a small farm. Where he got the money from to buy the farm I have no idea. His oldest sister came back with him and they farmed the summer of 1935. It may have been his sister's money that was used to buy  the farm. He went away in the winter to work at Portage la Prairie, Manitoba. 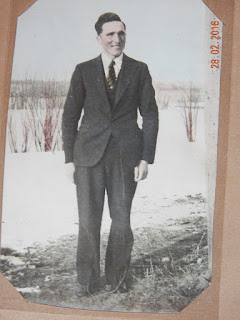 He came back in the spring of 1936 to his farm. He had four horses but they were left out for the winter. In the spring he had to find his horses. Most farmers let their horses go for the winter and there would be huge horse herds in the area.

Love found my Dad in 1937. He married Mom in Feb. 1938. Many weddings were very small so they were married in her Mom's house. 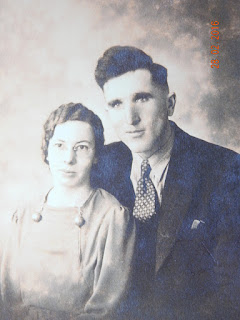 In February they went back to Dad's little house on the farm. They travelled by train and a friend met them and took them home. The next day Dad went over and started a fire in the house and they moved in with the few wedding presents they had.

The story was always the same. They had $60.00 and that had to last until September when they would have some grain to sell. So Dad promptly lost his wallet in the field with the $60.00 in it. They looked for hours. On the way back to the house Mom found the wallet.

From that time on they stayed on the farm.

Another surprise happened in 1939 when I was born.

The war started and slowly Dad expanded with farming and the grain prices increased.

Another surprise happened in Oct. 1940 when my brother was born. My sister was born in 1942.

They had a very small house and it was in very poor shape. Another boy was born in 1942.