One of the more interesting experiences that I bumbled into in my life was to be in a position to buy soapstone carvings from Inuit carvers. As I've said before I spent five years in the Arctic. It was an experience that was a major influence in my life .

In one remote settlement I was teacher, school principal and local administrator for the Canadian government. One of the jobs as administrator was to buy soapstone carvings from Inuit carvers. A program had been established before I arrived and I just carried on. I had a single signature bank account from the government which allowed me $1000.00 per month to buy carvings. Single signature because there was nobody else to sign besides my wife.

Each week day I had an hour after school where locals could come to see me about Govt. business. Each day people would bring carvings. Now I had a crash course from the previous administrator on how to "evaluate" carvings. I looked at such basic things as size, finish, detail, shape and artistic expression. I was quite the judge! In the late 1960's most carvings were in the $12.00 to 16.00 range. Little seals and birds which were numerous and were about two bucks.  So you see the producer of the carving received very little as you are familiar with retail prices in stores.

Some carvers had some artistic talent as they could look at a piece of stone and see something in the stone. Others tried to create something that was representative of some aspect of their cultural background. But many carvers just worked hard to produce something which they could sell to get some cash. When I arrived there was a pile of stone in front of each house. This stone had been brought in by ship and had come from a nickel mine at Sudbury Ontario. There was local stone but it was of rougher quality. It was harder and not easy to work with. I had one stone mining project while I was there where men went out for a week and by hand mined local soapstone. Tough work!

So most of the project was basically a handcraft production. It was meant to give the people some opportunity to earn some money. As I said before some of these people had artistic talent.

Much of what I learned was taught to me by the carvers. They were somewhat competitive. They didn't like to see someone play tricks on me. To polish the stone and make it shiny some people rubbed it with lard. I was told how to watch for this. You could smell it. Others polished with silver paper that was in cigarette packages at the time. They were quite interested to watch as I bought the carvings as I think they maybe had side bets with each other as to how much would be paid for each carving. Keep in mind these people did not speak English. I had an interpreter too help me.

At the end of the year I had a small warehouse of carvings which I had to wrap and box up to be ready to load on the ship and send to Ottawa.

I got to know each carver very well and appreciated the effort they had to expend to make a carving. I once tried to carve a little seal, but I gave up. So you can see that with the intensity of this experience I was deeply influenced in several ways.

I did not buy very many carvings for myself. I have regretted not buying more. I  did buy carvings to give to my family for Christmas. I'm always surprised when I visit relatives and see a carving I sent them . It's like meeting an old friend after a long absence. When my step Mom and Dad died they gave me back the carving I gave them. I was really pleased to get the carving back.


This carving was done by Ningiuk. He was a hard worker and wanted to support his family. However , all his carvings were mostly the same. 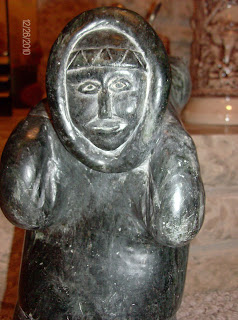 Masiu  carved this piece. He was more artistic and had great skill. However , he didn't produce many pieces. He was an excellent hunter so spent much of his time hunting seals. His wife helped him in the finishing of a carving. 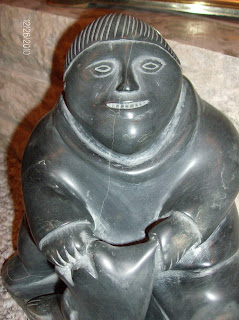 This carving was different than many pieces produced and showed great skill in using the piece of stone. 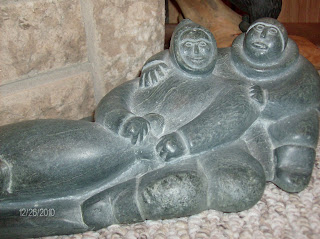