I was out to one of my favorite places...Michael Obrien Wetlands. It's an artificial wetland developed to treat storm water before it enters the river system.

Ordinarily it is beautiful in the fall. 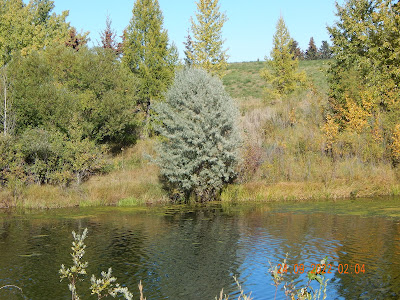 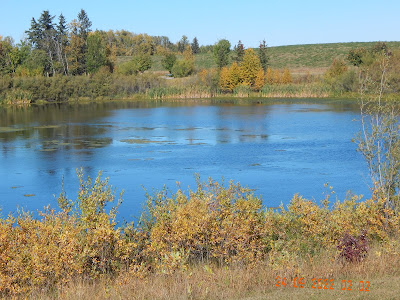 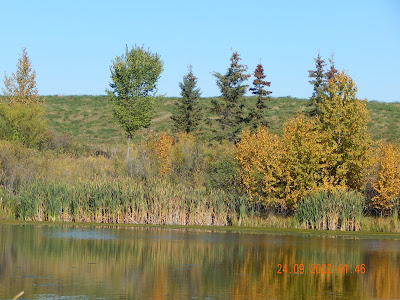 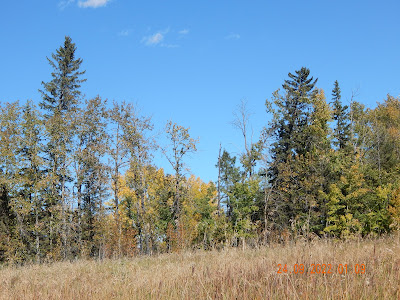 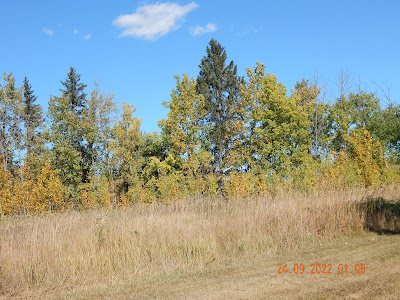 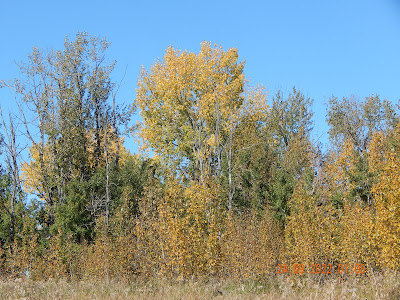 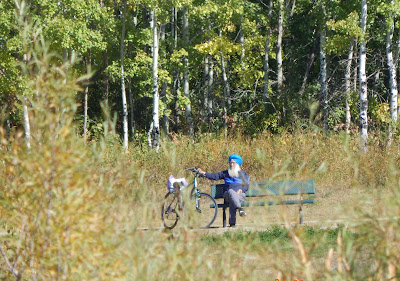 I FORGOT AN AWFUL LOT!

My  post on television programs was to lament the good shows of long ago TV.  I used a few examples of shows. I could have named a few more but the list would have been short.

As usual, readers know best and you listed many great TV programs. I had forgotten many of them. You mentioned many good shows.

And then I started thinking about what you left out. Some of these may not be the greatest of shows. Who could forget Archie Bunker. When I would come home from school , I would sit with the kids and read the paper with one eye and watch the show they were watching with the other eye. The Jacksons were on every afternoon. George was such a fool! They also watched the one with Don Knotts and then it alternated with "Jack" . I can't remember the shows name or Jack's name.

And then I get some anonymous comments. I'm usually very cautious with them.

I thought the one was my friend as he mentioned M.A.S.H. I remember that he really liked M.A.S.H. So I took a guess and used his name Uncle Bobby in the reply . My son replied and asked who is Uncle Bobby ? So all this time the "anonymous" was my son! Uncle Bobby was a teacher I taught with and he also taught my son.

I've been away for a few days. No, I wasn't sick. I wasn't even busy. I didn't watch the Queen's funeral.

I could not get on the internet and it said that whoever it is couldn't find my IP address. Statements with the notice that my "IP address could not be found" were of no help as I don't know what thy mean.

So tonight I finally phoned my provider. After a couple of useless suggestions, I thought , here we go for nothing. Then he said he would reset my modem. Bingo! I was back in business.

He explained that modems should be reset one in a while. Whatever time once in a while is.

So I'm happy to be back and catch up with some blogs.

I used to watch TV. Now I don't watch one minute in a whole year.

So what did I watch?

Some of you will have to be very old to remember these TV shows.

I liked the variety shows. The shows with several short segments. So for example Red Skelton always had a section with Clem Kadiddle Hopper. There was also a clown section. I also listened to Red Skelton when he was on radio.

Carol Burnette had a first class variety show. I liked her telephone monologue in each show.

Many people make fun of Ed Sullivan, but he kept us well entertained on a Saturday night.

Sullivan had great acts and we won't get that he had the Beatles.

Every Sunday night we watched Bonanza. This was a one hour show of the adventures of the Cartright family. I never missed it.

Now there were other variety shows that came and went.  The variety show was gradually taken over by situation comedies.

Now it's movies or long series that we buy at one time. I haven't got time to spend on a long series.

Has anybody else seen these shows and liked them?

Tell me the good shows that I missed.

I recently had cataract surgery on both eyes. The left eye was done on Aug. 2 and the right eye on Aug 16. The surgery went fine. The biggest problem was that the surgery was out of town and my wife doesn't drive so I had to ask for some rides and then get backup rides in case someone had to cancel out.

I'm not complaining. The results are fantastic.

I do not have much interest in British royalty. I do not follow them. I could not tell you the names of the Queen's third and fourth children.

I realize that our Canadian government is closely tied to the crown. If we wanted to leave the monarchy it would almost be impossible. All aboriginal treaties were made with the Queen. That's just a starter. The aboriginal people at one time were very  fond of the Queen. "The Great Mother promised to look after them". The Great Mother being Queen Victoria.

You had to know about Queen Elizabeth the second. She was popular, well known and made a good connection with people. She worked hard.

Now my Mother was very interested in British royalty. In the 30' and 40's, she did not have much access to information on the Queen. Mom ad Dad subscribed to two weekly farm papers. Their radio often did not work. Later radio was more reliable. They never did get a TV.

So in 1959 the Queen visited Saskatoon. My youngest brother was in a group at a stadium. Mom had made arrangements to meet me on the campus of the university of Saskatchewan and we would see the Royals. The motorcade drove around an oval and out of the area. We were close to them...about 12 ft. They went by us in a second and were gone in about three minutes. . We did not get a wave or a smile!

Now in May of 1939 I was at the tour that went through Saskatchewan. They were on a train and stopped briefly at Watrous, Sask. They walked on the station platform for 15 or 20 minutes and then got back on the train. Again my Mom had a good location to see the Royals. I was born in Oct. 1939! So yes, I was there but I did not see the King!

I usually have several walking routines to keep me occupied and active.

My present walking route is to walk through my subdivision to a  creek which has a valley about 300 meters wide and 25 meters deep. Then I walk along the west side of the creek. There is also an outdoor gym that I make a stop at.

So here's my walk. 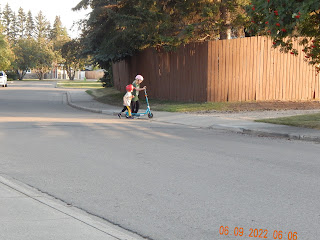 Walking through the neighborhood. 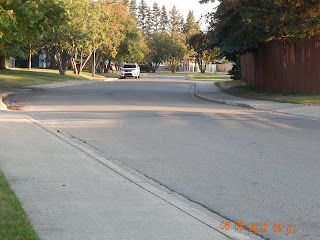 Down into the creek which is a heavily wooded area. 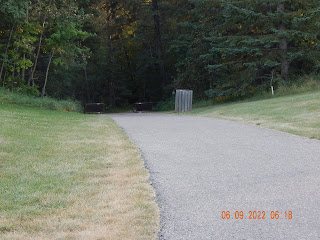 Bridge across the creek 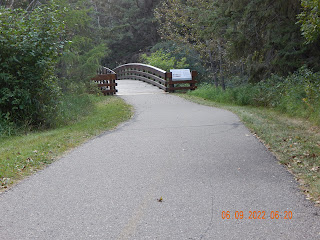 The creek is very low at this time 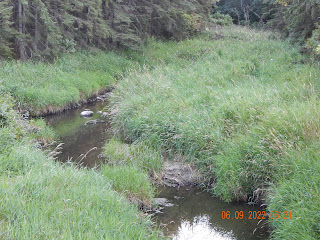 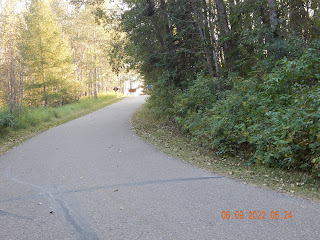 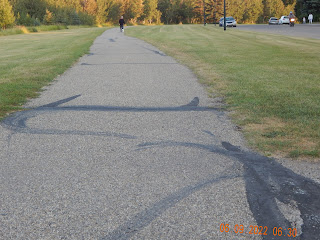 I have to make it to the power line! 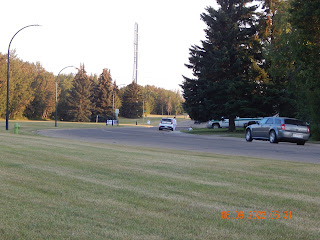 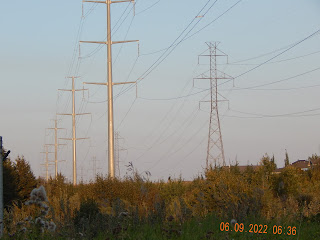 And a stop on the outdoor gym. I will do two leg exercises and two upper body. 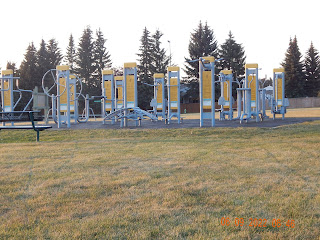 And her we are , home again 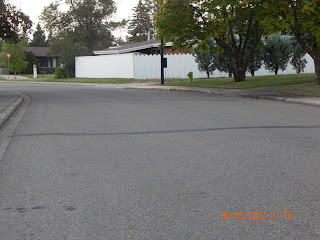