I sometimes set You Tube going and let it go where it wants to while I do something else . I don't really know how you tube works and I don't really care. You tube thinks it knows what music I like and plays it for me. Once in a while You Tube throws something very different at me.

The different tune thrown at me a while ago was a group called Pussycat. Ever hear of them? Well, I'd never heard of them. They were easy to listen to and You Tube played them often. 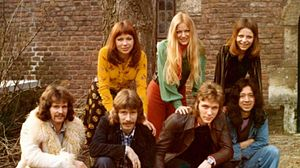 The group consisted of three female singers and a good band made up of rhythm guitar, lead guitar, bass, drums and an instrument not seen often...the steel guitar.

So I had never heard of this group. They were active from about 1975-85. They had hits and one of their hits was Mississippi so I naturally thought they were Americans.

So one day I decided to look up who this group was.

I found many surprises. They were  a Dutch group. The female singers were sisters. That one blew me away. As I said before they had some big hits.

So that gives a different perspective about the group and their music.

So tell me now, how many of you have ever heard of this group? Am I the only one who missed it?