I had the good fortune to be taken on a whaling trip while I was in the western arctic.(Inuvik)   I was teaching in a school with an approximate 900 enrolment, 50 teachers and 6 caretakers.

Some of the caretakers would spend part of the summer hunting whales and processing skin, fat and meat. They asked four of us if we'd like to go with them. I couldn't say no to this invitation.

They had their camp set up in an area known as White Fish station. They had camped there many times before and a lot of the equipment they used was stored there.

They hunted the beluga whales . Their hunting was not terribly efficient. They would spot some whales and chase them . The whales would need to come up to breath and then with a high powered rifle they would shoot at what little part was above water. So picture this. The boat is going up and down on the waves and the whale is also going up and down. Good luck in making a shot.

However, when I went out they did manage to shoot a whale. Then they have to quickly harpoon the whale and attach floats to it. They then tow it to the beach. They were not able to harpoon the whale when I was there so the whale sunk and was lost.

Processing the whale on the beach is a tremendous amount of work. They carefully take off the white skin. Then they collect the fat. Sea mammals have a high percentage of fat. Then they take off the meat. The meat is very black. It is hung over poles and dried to be eaten later.

The fat is boiled and the skin cooked in it. This is the muktuk which is stored to be eaten later. I did not try any of this food as I was not offered a taste. However, the people in the area looked at muktuk as a delicacy. This meat is highly nutritious and contains many vitamins necessary for good health. 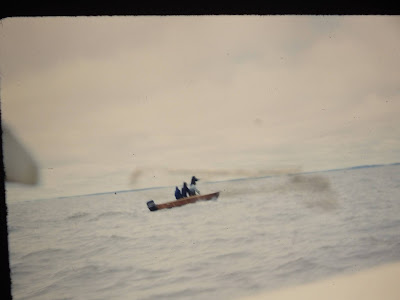 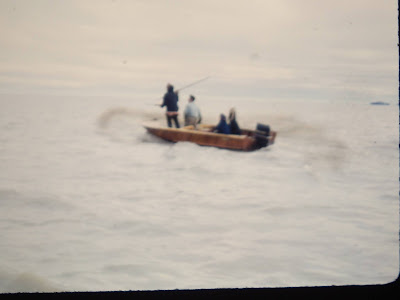 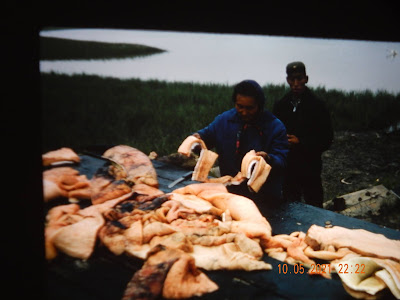 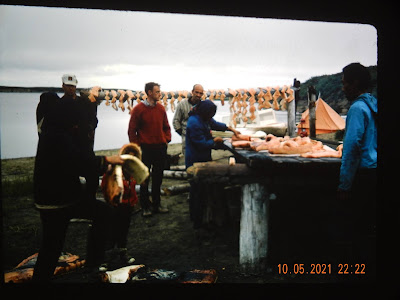 Skin hung over poles to dry 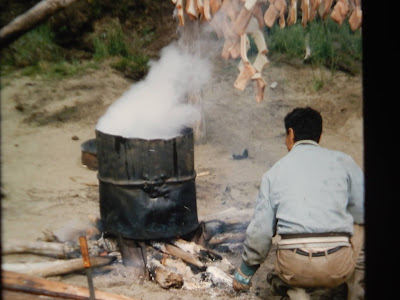 Boiling the  fat in an old barrel 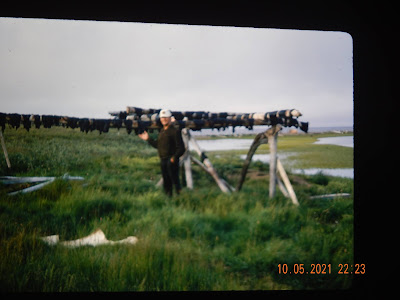 Meat hung over poles to dry 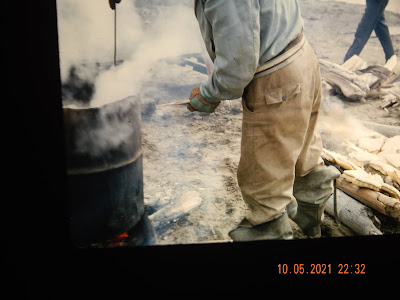 Tending the fire and boiling the fat 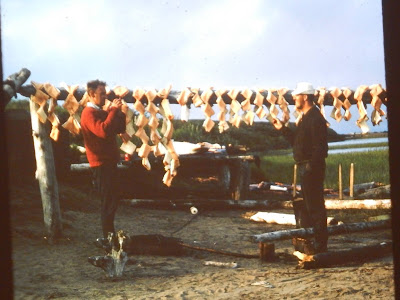 The skin has been cut in squares but not separated so that it is easier the work with.

This whole process is somewhat different in various areas

To live in an arctic climate rich food containing lots of fat is necessary for energy and body heat. These were some of the few hunters who knew how to harvest whales.