I'm reading Ernie Lyall's autobiography right now and I've just got to tell  you about this story. I never met Ernie but he was well known in the north. I did teach his son Pat. They lived at Spence Bay NWT  and Pat attended school in Inuvik which was 1000 miles away from his home.

Ernie Lyall was born somewhere on the Labrador coast in 1910. He spent some of his growing up years at Port Burwell, Canada where his Dad worked for a Moravian mission. There was no school so his parents and a police officer taught him some very basic numbers and reading. Ernie went to a Moravian boarding school for two years and that was his education.

Ernie decided to go working for the Hudson Bay company as a fur trader. When he was 17 years old in 1927, he set off in the company  ship not knowing where he would be placed.

This was the beginning of his 65 years in the arctic.

At that time the Hudson Bay ship, the Nascopie, took supplies and staff into the Arctic every summer. It would be the next summer before the ship came back. They picked Ernie up and put him at another post. He also got letters from home. So he got mail once a year. There was no radio contact as the Technology hadn't been developed. He became fluent in the Inuit language and many times was used as in interpreter for the police and government.

It was four years before he went south to visit his parents. It took him four months to travel to his parents home in Labrador.

The next summer he went back to the north and he loved the north so stayed there. He made many very long trips with dog teams. Many of these trips were incredibly tough.

He fell in love with and Inuit girl and he married Napisha and they had 8 children.

He said he wrote the book because there was so much bullshit out there that he wanted to correct it. He spent much time criticizing a well known Canadian author , Farley Mowat. Farley Mowat wrote several books on the arctic and usually only spent a short time in the north where he put together enough information to write a book. I've read ten of Mowat's books and liked them as Farley tells a good story.

Later in life Ernie was hired by the government for various jobs. One of his many jobs was Justice of the peace.  He said that the first wedding he did that he was more nervous than the groom.

So Ernie has filled this book with many incredulous adventures during his 65 years in the   Arctic. I loved all of his stories. His stories make you feel as if you were right there with him. They make sense to me as I was in the North. 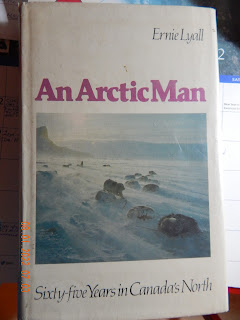 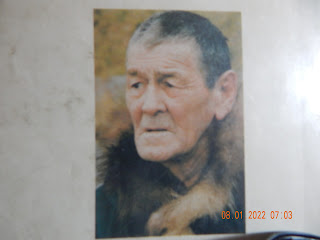